From 2020, the global marketing team for Moskovskaya® Vodka will be led by a team of two extraordinary women – Helena Zakmane as Global Brand Director and Felicity Gransden as Global Brand Ambassador. Both Helena and Felicity have previously worked at Pernod Ricard and are joining the Amber Beverage Group whose mission is to grow Moskovskaya to a 1 million 9L case brand. 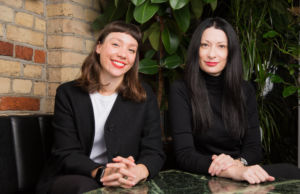 “Moskovskaya is a truly authentic brand with such strong heritage and history, I feel excited and honoured to take care of such a jewel, and be in charge of its future success,” said Helena Zakmane, Global Brand Director of Moskovskaya Vodka.

The first initiative the team has taken is to set up a series of Mosko Embassy events – with its pilot event taking place on 27th February in London, moving on to Italy, Spain, and Portugal. The Mosko Embassy is Moskovskaya’s home away from home. The pop-up will launch in London and roll out globally throughout 2020. The team will invite trade and consumers into the world of Moskovskaya and introduce them to the brand’s heritage, hosting a series of events including an introduction to traditional Russian spirits and the origin of the Moscow Mule.

“After working in the vodka category for three years, I am looking forward to drawing on Moskovskaya’s unique heritage to create interactive experiences for our consumers. Introducing them to the world of Moskovskaya and developing a new story which blends the old and the new,” said Felicity Gransden, Global Brand Ambassador of Moskovskaya Vodka.

“At ABG we highly value gender diversity and we are proud to share that the current split within the group is 55% women and 45% men,” said Pepijn Janssens, the Chief Marketing Officer at Amber Beverage Group. “ABG’s CFO, HR Director and several production, retail and distribution companies are all led and managed by women and it felt like a natural evolution to put Moskovskaya in the hands of an all-female team,” said Pepijn Janssens.

The Amber Beverage Group-owned Moskovskaya® Vodka brand is now available in over 65 markets worldwide, with a strong and recognized following in the key strategic markets of Italy, Canada, Spain, Portugal, Lebanon, the Baltics and the UK. The brand has received numerous awards and accolades from experts in worldwide competitions since it received its first Gold medal in 1954 at the International Trade Fair in Bern.