Move over Montenegro. Step aside Fernet. There’s a new bitter bottle for the bar in town. And it hails from Latvia. Riga Black Balsam, created in 1752, may be the first Latvian spirit most of us ever experience. But while spirits from this region may not be very familiar to American consumers, Riga Black Balsam offers a unique taste of Baltic heritage and culture, with a deep, noble flavor that will resonate with modern consumers; particularly those who relish the role of pioneer.

Kunze, a Riga pharmacist, actually pioneered the recipe in 1737 and refined his formula over time, finding the perfect combination by 1752. He perfected his Riga Black Balsam recipe based on a tradition of craftsmanship that stretches back to the 13th century when the balsams (herbal extracts) of the Hanseatic Trade League first became known across Europe and Russia thanks to traveling European merchants. In Riga the first balsam recipes date back to the 16th century and in 1752, when Kunze introduced his 24-ingredient liquid to a wider audience Riga Black Balsam was embraced swiftly and fully.

This centuries-old liqueur, in its traditional clay bottle, comes straight from Riga, the capital city of this Baltic nation, and has been a perennial – and ubiquitous – national favorite since it was introduced to the nation. And no wonder, as it delivers the magnificent power of nature; just as you’d expect from a bitter liqueur created near the Baltic Sea. From the moment Kunze sold his first bottle of this perfect liquid, Riga Black Balsam was deemed a classic, and the bracing tonic has spent centuries enjoyed simply by Latvians everywhere they drink, dine and entertain. 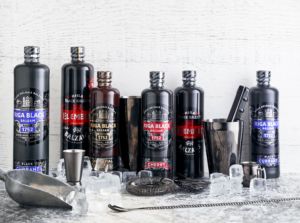 Now it is time for Americans to enjoy it too. But they almost didn’t get the chance. The recipe was suddenly lost in 1939 when the ethnic German population quickly left Latvia before the impending Soviet occupation. And it wasn’t until five years after WWII that the shredded original paper recipe was accidentally discovered and subsequently carefully restored by the efforts of loyal former employees.

After centuries of being enjoyed mostly in the Baltic region, an introduction here in the US brings new opportunities for Riga Black Balsam to buck tradition, to encourage discovery and exploration. As with many tonics that began as a simple sipper after dinner or as the key element of a hot toddy designed to cure whatever ails you, once it landed on our shores Riga Black Balsam went from simple digestif/cure-all to embracing its new role as an integral cocktail ingredient. It is dark and complex when taken neat, but stunningly versatile when paired with different mixers.

And no wonder. It takes 24 natural ingredients to go into the development of Riga Black Balsam. Ingredients such as common herbs, roots, buds and Valerian, Wormwood, Black Pepper, Ginger, Melissa, Linden Blossom, rare ingredients such as Gentian, Peruvian Balsamic Oil, plus natural fruit juices, French brandy, sugar syrup, grain spirit, artesian water, burnt sugar are no secret but only two people in the world – Riga’s master distiller and his assistant – know the details to complete the renowned single-barrel crafting process. All that is known about the magic of production is that the botanicals are infused in a spirit-water mix to derive the so called “Riga Black Balsam essence” – the basis for the final product, and then the essence is blended with the rest of the ingredients, and allowed to marry in a natural clay bottle, thus retaining and preserving the qualities of the liqueur.

In America the original, Riga Black Balsam coming in at 45% alcohol reigns as the brand’s standard bearer, while the newest line extensions introduced within the last two years – cherry and currant – come in at 30% ABV. Making them easy to mix and a great aperitif. In addition, an Espresso version will be launched into the US later in 2020. Embarking on a global spirits exploration now means a trip to the Baltic region… a few ounces at a time.